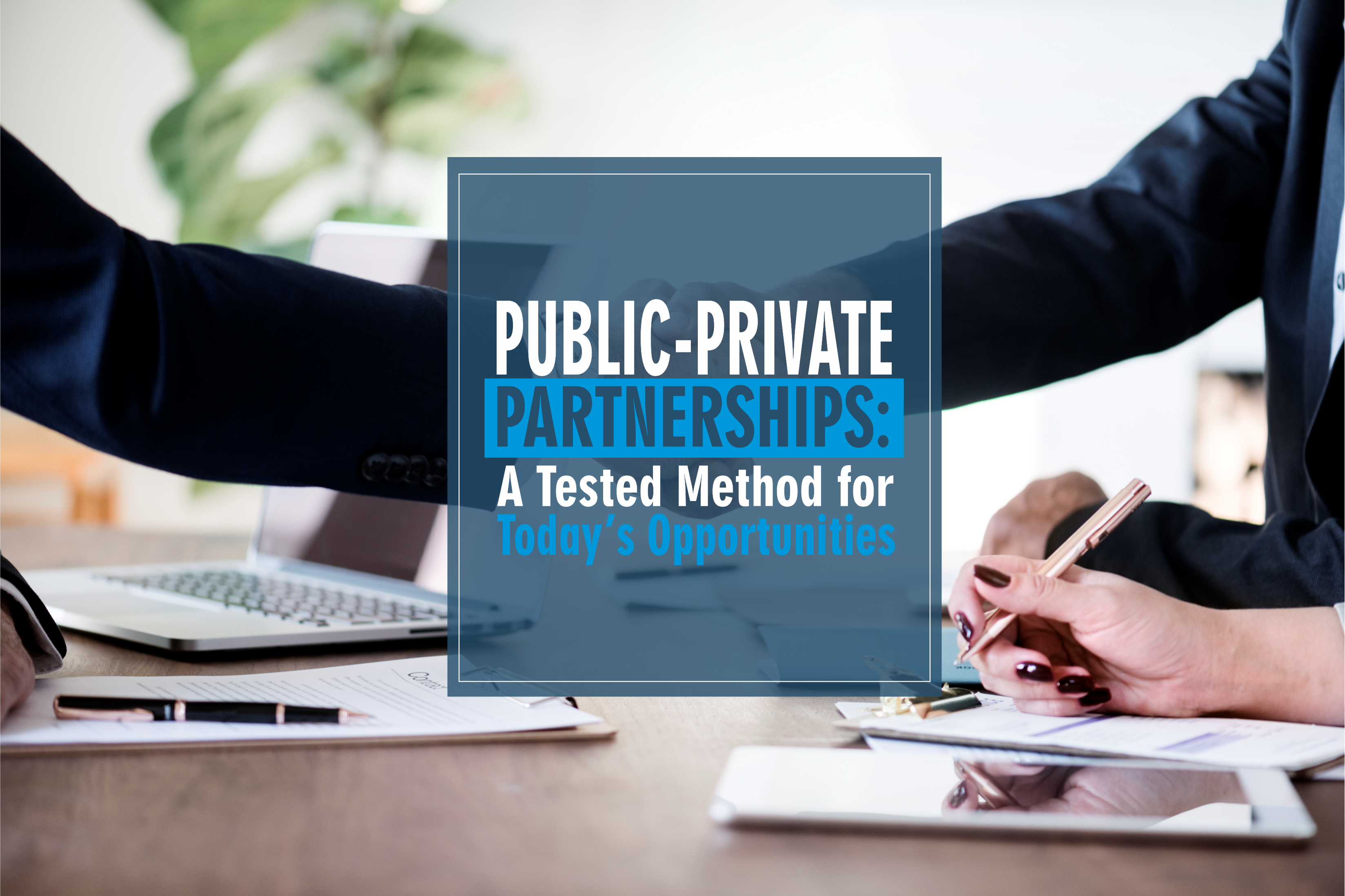 The concept of privatizing public services has the ability to create skepticism and controversy among the laymen. However, public-private partnerships (PPP) have been part of the fabric of American history since its inception. Simply put, a public-private partnership occurs when the public sector (the government) and the private sector (business or private entity) enter into a partnership in order to achieve a goal – either providing a service or engaging in a project. There have been countless examples of such partnership dating back to the Age of Exploration when new routes were discovered by daring explorers, to recent times when waste management, water, and other public services are provided for by private companies. This type of partnership is what has allowed humans to continue making progress, as it relies on the expertise of a private organization to get specialized work accomplished while the governing bodies can ensure their constituents will be entitled to the benefits.

“Public Goods” are defined by two characteristics – “non-excludability” and “non-rivalrous” consumption. This means that it is a good or service that generally is not performed for a profit, can be used by a number of people at the same time, and is not hinged upon payment consideration. An example of this would be the number of public services including national defense, police, fire, public safety, national parks, etc. On the other hand, “Private Goods” are the exact opposite. This means that a profit motivation can be realized, and that the good or service is based on expected payment. An example of a private good would be any consumer goods for purchase such as a sandwich or a candy. Of course, like most things in life, the line between private goods and public goods is not always clear. In fact, the following graphic provides a strong analogy for how things are often more complicated than initially perceived. Just as the colors commingle, there are opportunities that arise for privatization and public-private partnerships to add value to all parties involved.

The most basic type of public-private partnership occurs when a government agency outsources a specific function – whether operations, management or maintenance – to a third party provider. Outsourcing in this way allows the public to benefit from a particular private company’s expertise, competitive bidding, economies of scale, etc. in a given area, without necessitating that the representative government become an expert in that same area. In general, this allows government entities to maximize utility and efficiency for each taxpayer dollar spent.

Many progressive cities are now reviewing the list of services and determining if they can reduce overhead, while ensuring that services are performed for constituents. In the past, many cities would take the position that the public sector was there to perform the services that the private sector would not or could not perform. This might be correct for services such as police or fire. However, other services once viewed as solely public sector are being looked at in a different light now that the private sector has created a public-private industry.

In this regard, most citizens turn on the water and assume that the city is responsible for its taste, clarity, and odor – especially since they typically receive a water bill from the city. Likewise, since a wastewater charge is included in the city’s water bill, citizens assume that the city is providing that service as well. However, just like with solid waste management, these services are undertaken by a private company that the city enters into a contract to collect the solid waste, manage water, treat the wastewater, etc. The city does not sell any assets, and they generally maintain the ownership of the pipes in the ground as well as the wastewater treatment facility. Additionally, they still own the water or other groundwater rights within the city.

Simply put, municipalities have proactively been seeking partners to help provide basic services in order to free up resources and concentrate on expanding their municipalities. They are no longer simply in the business of providing the services of water, wastewater, tax collection, etc., although they maintain responsibility and control through outsourcing. This means that instead of the city manager or mayor worrying about compliance with EPA or state environmental quality issues for the water, they can now devote this time to unifying a community over controversial issues, driving economic development, enhancing public safety, or outlining a plan for the city’s future.

For a developer, the advantage of entering into a partnership with a public entity is that it decreases the developer’s risk by filling in financing that would otherwise need to be covered by a developer’s own investment in a project. Therefore, a developer can minimize the firm’s exposure and maximize the internal rate of return through this type of partnership. While not all partnerships are equal, working together to forge a public- private partnership could lead to a win-win scenario for both the public and private entities.

Most importantly, by creating this partnership, the private entity then gains access to additional public finance resources that can help to cover different aspects of a project’s costs. Combining several of these sources can add up to a substantial sum. The keys to this method are (1) creating the partnership; (2) well-defined project perspective, objectives and goals; (3) detailed agreement between the public and private entities; (4) creative thinking in matching up existing public funding with the needs and qualities of the proposed project; and (5) willingness of each partner to help meet the other partner’s needs. Though there are various financing mechanism available, the following list highlights the several major types utilized for real estate-specific assets:

Tax Increment Financing (TIF): The most frequently utilized mechanisms in PPP earmarks estimated increases in property and sales taxes in a designated geographic area (a “District”) to underwrite public improvements related to development in the area. This can be done by creating a quasi-governmental body which manages the TIF by issuing bonds to pay for the public improvement. These TIF Bonds may then be issued and repaid with the incremental increase in taxes to be realized and captured within the TIF District. Often, the area designated as the District is considered to be unimproved, blighted or underdeveloped.

Community Development Block Grants (CDBG): Designed by HUD to provide communities with resources to address a wide range of development needs, the CDBG program provides annual grants on a formula basis to local governments and states.

Tax Exempt Financing: Due to a number of legislative initiatives over the past decade, several areas across the country have been designated for tax incentives, including tax- exempt financing, as part of redevelopment. These zones allow for tax-exempt bonds to be issued in support of redevelopment projects. The most recent examples are the Opportunity Zones that have been established by the Trump Administration.

Tax Credits: Tax credits exist on local, state and federal levels, and can be combined to increase the equity in any real estate development project, as well as to reduce the exposure of a developer in a given project. They take many forms, and are targeted to achieve different policy objectives, such as economic development of low income areas, brownfield rehabilitation, or energy efficiency.

Environmental Grants/Underwriting: An area of underwriting that exists to assist developers in creating environmentally friendly projects. Including green space in a development and maintaining wildlife habitat can potentially qualify a project for federal funding that is administered by state wildlife agencies. Some programs that could potentially qualify for funding include reclaiming waterways, protecting woodlands, preserving natural habitat, creating energy efficiency and coastal preservation.

An example will illustrate the economic benefits of a Public-Private Partnership, giving particular attention to the general economics of these successful developments, by comparing “traditional” economic structures with only private equity to those that include a public sector capital contribution as a result of a public-private partnership.

Sugar Land, Texas utilized a public-private partnership to develop its mixed-use Town Center, contained on 32-acres of land, and summarized as follows: 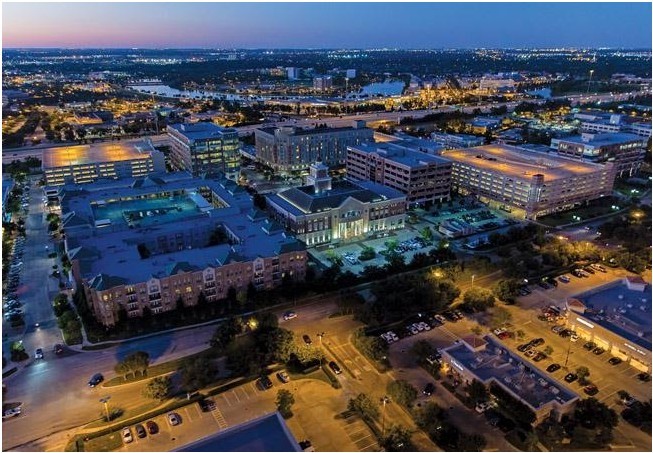 Below is an analysis of what the Sugar Land Town Center development would have looked like without public incentives. This structure will be called “traditional” as it is compared to a public private partnership.

Based on current revenue, expense, and market valuation techniques, the following is the anticipated value and internal rate of return on the (traditional) equity, assuming that the assets were sold roughly four-years after the start of construction:

Following the repayment of the traditional debt (70 percent loan-to-cost) the net cash flow from the sale of this development would yield roughly $89 million. Based on the initial (traditional) equity investment of $56 million, this return, over the four year investment horizon, equates to approximately a 17 percent internal rate of return. For a traditional real estate investment, particularly one that requires $56 million in equity, that is not that attractive of a return, after adjusting the investment for risk.

For many real estate equity investment funds, a minimum threshold for internal rate of return should be 30 percent – far above the 17 percent in the above “traditional” equity structure. Consequently, since there may not be any room for cost or expense reductions, or even revenue enhancements, the only way to increase the internal rate of return would be through leverage.

This leverage was found through a partnership with the city of Sugar Land, as the city had a desire to see the development succeed for a variety of visionary reasons. Indeed, the plan met the public sector’s desires to shape its future and achieve a particular vision of what life should look like for its citizens.

Thus, the financial structure of the development under the public-private partnership was as follows:

For the developer, the city’s contributions made a significant positive impact on its internal rate of return. The capital structure, including the impact of these incentives was:

As a result of the city’s incentives, the developer’s equity investment was reduced from $56 million, to $34 million.

Following the repayment of the traditional debt (70 percent loan-to-cost) the net cash flow from the sale of this development would yield roughly $89 million. With the developer’s equity investment of $34 million, over the four year investment horizon, this finance structure results in approximately a 37 percent internal rate of return.

Due to the city’s incentive package, the developer was able to increase the internal rate of return from 17 percent to 37 percent. Consequently, the finance structure under the public-private partnership for the Sugar Land Town Square development made the project economically feasible solely as a result of the incentive package offered by the city.

What does all this mean? Municipalities are beginning to craft their own visions of what they want their futures to look like – from small towns to large cities. Often times, these vision statements are paired with development incentives or economic development funds that aim at facilitating the realization of this vision. This rings to be even more true when the typical cash resources become limited during questionable economic times. Public entities will look to lean into more PPP’s, to help continue development and growth in the communities. For the private organizations that participate, benefits will be apparent as the Public contributions usually come in form of a grant which doesn’t need to be paid back or cause dilution in ownership. Both of these benefits shave a direct impact on the return developers can produce for their investors. However, these project’s success is usually heavily relied upon the strong relationship forged over years of working together between both private and public sectors. Organizations with these relationships will not only get the opportunity to thrive even in concerning economic climates, but also enable both sides of the table to utilize their strengths to move the needle on human progress.

You can follow the blog to see what else David Wallace writes.